For the best Minnesota Wild coverage on the web, please visit Hockey Wilderness.

To the outsider, the point system in the NHL makes things look much closer than they really are. If you've read the NHL standings posts here before, you know that already. Still, while reporting the reality of the situation, we still get e-mails telling us, "It's only three points." Indeed, it is. Three weeks later, it is still just three points, yet the Wild have dropped in standings.

Where do the Wild fit in the standings this week? Let's look at their three respective groupings and see how they stack up.

The lead in the Northwest has spread to five points, with the Wild now closer to last place than first. This is how things work in the NHL when you don't play well and only win one game in two weeks. Look at the goal differential column. The Wild have given up 13 more goals than they have scored. Meanwhile, the first place Canucks have scored 16 more than their opponents. Even Hall of Fame NFL coach and announcer John Madden knows that you have to score more points to win the game. Boom!

Last week it was "only" three points. This week it is "only" five. Wrong direction, with no turnaround in sight. 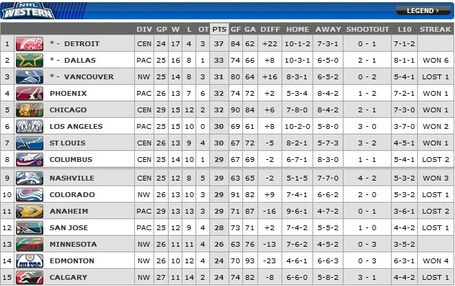 Here is where the chorus picks up. Despite losing every game this week, the Wild only dropped one spot, and are still just three points out of the playoffs. The biggest issue with that line of thinking is that the Wild are now in 13th place, where last week those same three points were good enough for 12th.

So what, right? The Wild now need to displace five teams to make the playoffs. That includes a strong San Jose team that will figure it out long before the Wild do, and Colorado who is now healthy and making their move. It is obscene to think that the Wild are suddenly going to leap frog five teams and vault into the playoffs.

Sure, things happen everyday.Just don't get overly attached to that Cup parade. 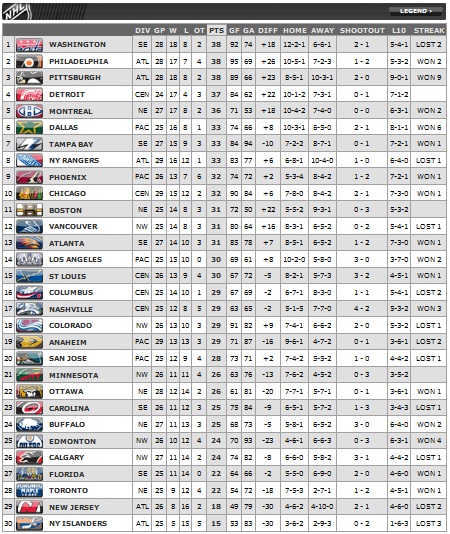 Finishing up, we look at where the Wild fit in the grand scheme of things. With some very bad teams out East, the Wild continue to be stuck in the middle. The worst team in the West (the Flames) have four Eastern Conference teams below them. That's just sad, really.

Checking out our new favorite column, the goal differential, look at the teams at the top. Plus 18, +26, +23. The Wild only have to make a 30+ goal swing to compete with that. So, score three goals and shutout their opponent for ten straight games to do that.

Back to the standings, the Wild fall to 21st in the league, meaning they are still one place better than they finished last year. Break out the champagne bottles. Progress has been made. At this rate, they will be competitive in 2026 or so.