For the best Wild coverage on the web, please visit Hockey Wilderness.

Every week, we look at the standings, and where the Wild fit in. For the past six weeks, they have come in closer to the bottom than the top, which was sickening enough. Watching the team you love fall to the bottom of the standings, or even remain stuck in mediocrity is never easy.

This week, we find out just how much worse it can be. Below, an image sure to turn the stomach of any Wild fan.

In the Northwest, not much has changed, and not much looks to change. The Wild remain in third place in the division, twelve points off the lead, and four points out of second. They have put some distance between themselves and the last place Oilers, with 10 points now separating them from the cellar. However, the Flames continue to hang in as well, holding just two points below the Wild.

No one is going to catch the Canucks, save for a massive meltdown in Vancouver. The Avalanche are certainly able to be caught, but second in the division does little for playoff hopes. The reason the Wild are focused in on the Avs is because the Avs sit in eighth in the Conference.

The problem with those four points is that even if they catch the Avs, there are four teams in between the Wild and the eight spot. The team would have to over take defending Stanley Cup champion Chicago in order to take the final playoff spot. You can bet that will not be an easy task. As the Wild have been taught, the enemy has a vote, too. The seven teams within reach of the Wild are not simply going to hand it over because the Wild want it.

While Wild fans may still be clinging to the hope of a playoff push, we continue to focus on the NHL standings as a whole, and how the effect the Wild's draft position. As sits right now, the Wild would draft 10th. This means despite some emotional wins under their belt, and moving back within a couple games of the playoffs, the Wild are... exactly where they have been all year.

A big win against the Coyotes has pumped in some much needed momentum. What the Wild do with it on a long East Coast trip is yet to be seen. The Wild went 10-4-4 against the East last season, but are just 2-6-1 this year. The dominance they once possessed over the right coast is no longer there. Maybe they rediscover it and make their push against some weak opponents.

Finally, the image we promised. If you are ill, or have a weak stomach, you will not want to look directly at it. Instead, make one of those papers with the pinhole in it, like when you look at a solar eclipse. Whatever you do, try not to heave on your keyboard. 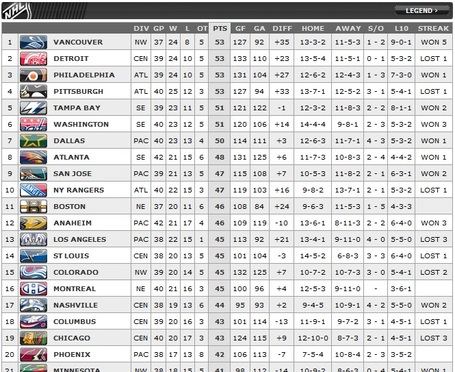 Yes, Wild fans. The Canucks are in first place in the NHL. As if being as close to last as first wasn't enough.