The Minnesota Wild are struggling quite a bit as of late, most recently losing 4-3 to the Calgary Flames on Sunday. It's been an unfortunate slide for the team, especially considering the strong start they were off to earlier in the season.

It's unclear whether the fans at Sunday's game were trying to be really poetic or they simply couldn't find enough friends that wanted to take in a hockey game, but the picture our friend CJ Fogler captured during the Fox Sports North broadcast sums things up pretty perfectly. 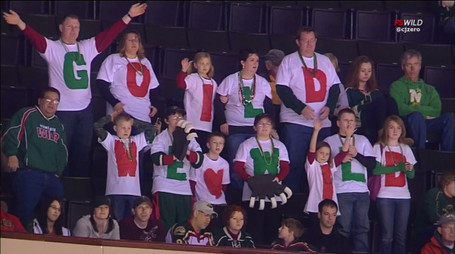 Yes, it seems just as is happening with their favorite team on the ice, the fans couldn't find a 'W' either. Get it? A 'W" as in a "win" as in something the Wild have done just three times in their past ten outings.

For more on the Minnesota Wild, check out Hockey Wilderness. You can check out more hockey news from around the league at SB Nation's NHL page.

Flames Vs. Wild: Minnesota Loses To Calgary In Game with Playoff Implications