PHOTO: Tom Gilbert Wears A Stick As An Earring

Share All sharing options for: PHOTO: Tom Gilbert Wears A Stick As An Earring

Leave it to Tom Gilbert to start a new fashion statement.

The Minnesota Wild defenseman, who was acquired for Nick Schultz in February, took a stick through his helmet in the third period of the Wild's 3-2 overtime win Thursday night against Florida and ended up looking like a Steve Martin groupie

The photo is after the jump. 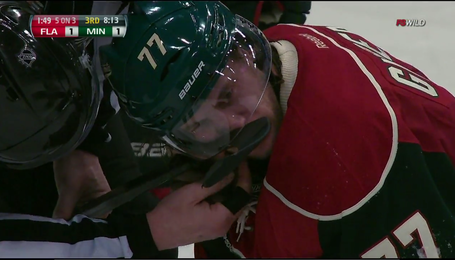 Thankfully Gilbert wasn't hurt by the play, which was reminiscent of goaltender Josh Harding taking a stick through the eye opening by then-teammate Martin Skoula in 2008 and in fact the defenseman played his best hockey after. The Bloomington native assisted on Erik Christensen's tying goal with 31 seconds left in regulation to tie the game at 2, then found Wild captain Mikko Koivu on a breakout pass for the game winner 15 seconds into overtime.

Still, I don't see many players attempting to wear sticks as earrings, even if it gives them two assists.

For more on the Minnesota Wild, check out Hockey Wilderness. You can check out more hockey news from around the league at SB Nation's NHL page.