NLL Lacrosse: Minnesota Swarm and Edmonton Rush Keep it Fun as They Get Set to do Battle

The Minnesota Swarm and Edmonton Rush have started the West Finals a little early, taking their battle to social media.

Share All sharing options for: NLL Lacrosse: Minnesota Swarm and Edmonton Rush Keep it Fun as They Get Set to do Battle

With the firestorm over the LA Kings twitter account from a month back, the reality of social media changed for professional sports franchises. No longer were the accounts only for dispersing official information and press release level stories. Now, the accounts were becoming "alive," more... "human." In other words, exactly what social media is supposed to be.

The National Lacrosse League is no stranger to keeping things more fun than serious, and is certainly no stranger to Twitter. With the conference finals set to take place this weekend (discount tickets still available), the Minnesota Swarm and Edmonton Rush are ready to do battle at the Xcel Energy Center. But first, they have taken the battle to the social realm.

Late last night, it was announced that Rush owner Bruce Urban will be on 93X here in the Twin Cities at 8:30AM. When the Swarm mentioned it on their Twitter feed, Urban replied:

This all blew up into a fun exchange of tweets between the Swarm's official Twitter and that of the Rush: 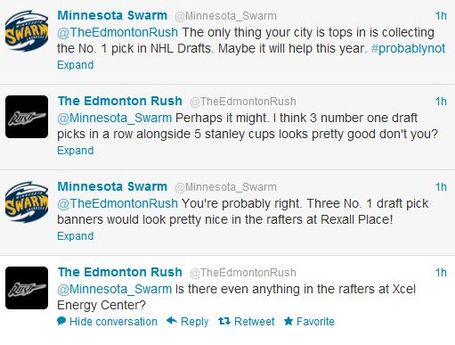 Oh. Snap. They did NOT just bring up the five Stanley Cups they won, did they? You know, back in the 80's and early 90's? The last time Edmonton won anything was 1990. The Twins won the World Series in 1991. Yeah, that's right, we got you by a year, Edmonton! You don't even have baseball there.

Well, to be fair, we don't have much baseball here, either. That's not the point, though.

And yes, there is something in the rafters at the X. There's the, um... retired #1 sweater. Retired at opening night in 2000. That's the #1, which reads "fans" above it. More of a marketing gimmick than anything, but it's still up there. There is also that sweet Northwest Division Champions banner from 2007. That's the year the Wild were punished in the first round by the Colorado Avalanche.

It's also the last year the Wild made the playoffs at all.

The Rush also came at we Minnesota folk with what must be a mistaken reference to North Dakota:

While we may be just bloggers that live in our mom's basement, we do have the right to stay up as late as we want. So more like 11 o'clock, gosh darn you, donchaknow?

The Swarm, however, played the trump card over on Facebook. It seems that while writing the game preview for MNSwarm.com, they needed some help finding information on the city of Edmonton. They, as many are wont to do, turned to Siri, the all seeing, all knowing female voice inside your local iPhone: 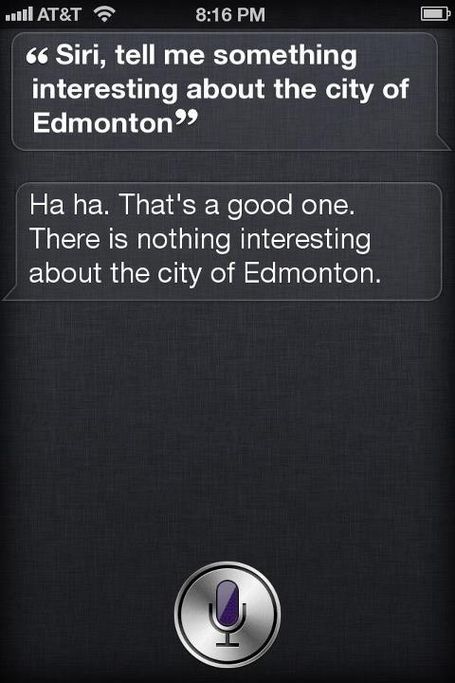 Agreed, Siri. Agreed. It's not a wonder Apple makes so much money. It is difficult to get such honest and completely accurate answers from most AI interfaces.

In case you missed what all this is about, the Swarm and Rush this Saturday at Treasure Island Field at Xcel Energy Center. Tickets are still available, and through the link above, you can get discounted tickets to help you poor, suffering Minnesota Sports fans get in to see meaningful games in May.

The Rush staff think we don't know what it's like to win a championship. To them I say Go Vikings Timberwolves Wild North Stars Lynx and Twins!

We'll see you Saturday night inside the Hive.